There’s so much to get through, and I’m still processing it all. I may just post it in pieces when I’m able.

I went to the museum first thing the next morning (well, not first thing… I found a little cafe that had what was probably the most amazing cheese croissant that has ever been created, but I digress) and I was the first one into the exhibit.

It’s beautiful, eerie, and wonderfully presented. A city beneath a city. Dark and cool and quiet, like a tomb.

The clue mentioned ruins below a city in the new world, and the north, and “carved from the living, if only one could listen,” and “it marks the end of the path.”

I felt certain I wouldn’t find anything down here on the “path of wool” but there were loads of carved objects, ceramics and tools, I just had to find the right one, the one that might mark the “end of the path.” Something carved from the living, which made things a little more difficult. I was thinking maybe a book bound in leather?

And then I heard it. Knocking. Faint. Not loud and forceful as it had been in Israel, but almost plaintive.

More and more people had arrived and it made it hard to hear, the knocking was that quiet.

But I found it. Not a door. At least not one that anyone had recognized as such. At the end of a long hall was a wall built of bricks or stone, jutting out of a rocky outcropping. The end of the path? The “living” bit didn’t quite make sense, until I got closer…

The bricks weren’t made of stone, they were carved from wood.
A hidden door. Unseen. Leading to some undiscovered area of the old Montreal. I stood listening, still. Until I worked up the nerve to do what I wished I’d done in Cape Town. What I should’ve done in Tel Aviv.

I was going to to knock back.

I approached the wall, but in the dark of the moody museum I hadn’t noticed that the entire wall had been ensconced in glass. Unreachable. Unknockable. 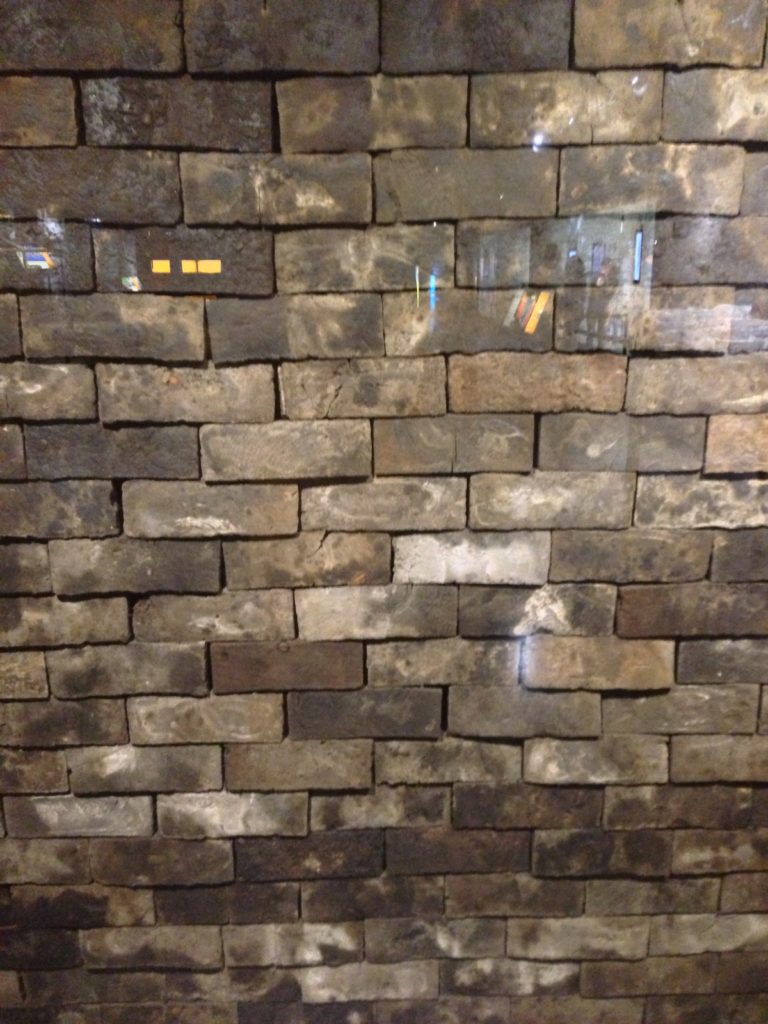 And here I was, completely stymied by an inch-thick sheet of plexi.

I asked an attendant if the glass had always been there and she said she believed it had been.

The knocking was getting more and more faint as I myself lost hope in the search. As I slowly started to realise that something had gone wrong. Not with the trail, but with me. Some fundamental thing I was meant to learn. Some enlightenment I was meant to gain, but hadn’t.

I took a step closer to the glass, put my hand on it. Who was knocking, and now fading away? Part of me wanted to believe it was some piece of him. Calling me on to the next step, the next phase, like a game a father might play with his young daughter. Hiding from her, knocking on a door, and when she came close he would run off to hide somewhere else. But in the end she would find him and he’d scoop her up and hug her and they’d laugh that she was ever scared at all. It was all just a game.

I didn’t need to look in the journal. I could feel it. My heart sinking with all hope that anything would come of this. I’m not a treasure seeker, a truth hunter. A brave adventurer. I’m not my father.

I turned to leave and walked face first into the sternum of the tallest, most mountainous human being I’d ever seen. Before I fell backward he took me by the shoulders, gently righting me before I stumbled.

I looked up at his big bushy mustache which stretched across his face as he smiled down at me.

I apologised, embarrassed, and he sort of set me down and nodded. And then he apologised. I shook my head, saying I was the one not watching where I was going.

But then I noticed on his forearm, a tattoo. The symbol of the Gossmere guild.

He said that he always told himself that if he ever saw me again the first thing he’d say was that he was sorry. Sorry for not coming to find me, for keeping his word to my father instead of trying to protect me. Sorry for his part in the spell that hid me away.

One thought on “The Door – Part One”