It’s been a long week and I suddenly have a lot to do. I’ve made some pretty big decisions since my last post. But… backing up for just a second.

Before I headed up to Hudson last week I hopped down to SoHo (I didn’t have an appropriately rural weekend bag. Yes, I have a sickness.) On my way home I walked up Prince St, coveting all the gorgeous, outlandishly expensive shoes that I. Will. Not. Buy.

I popped into this small bookshop called McNally Jacksons (it’s amazing) and that’s when I saw it. This crazy machine. 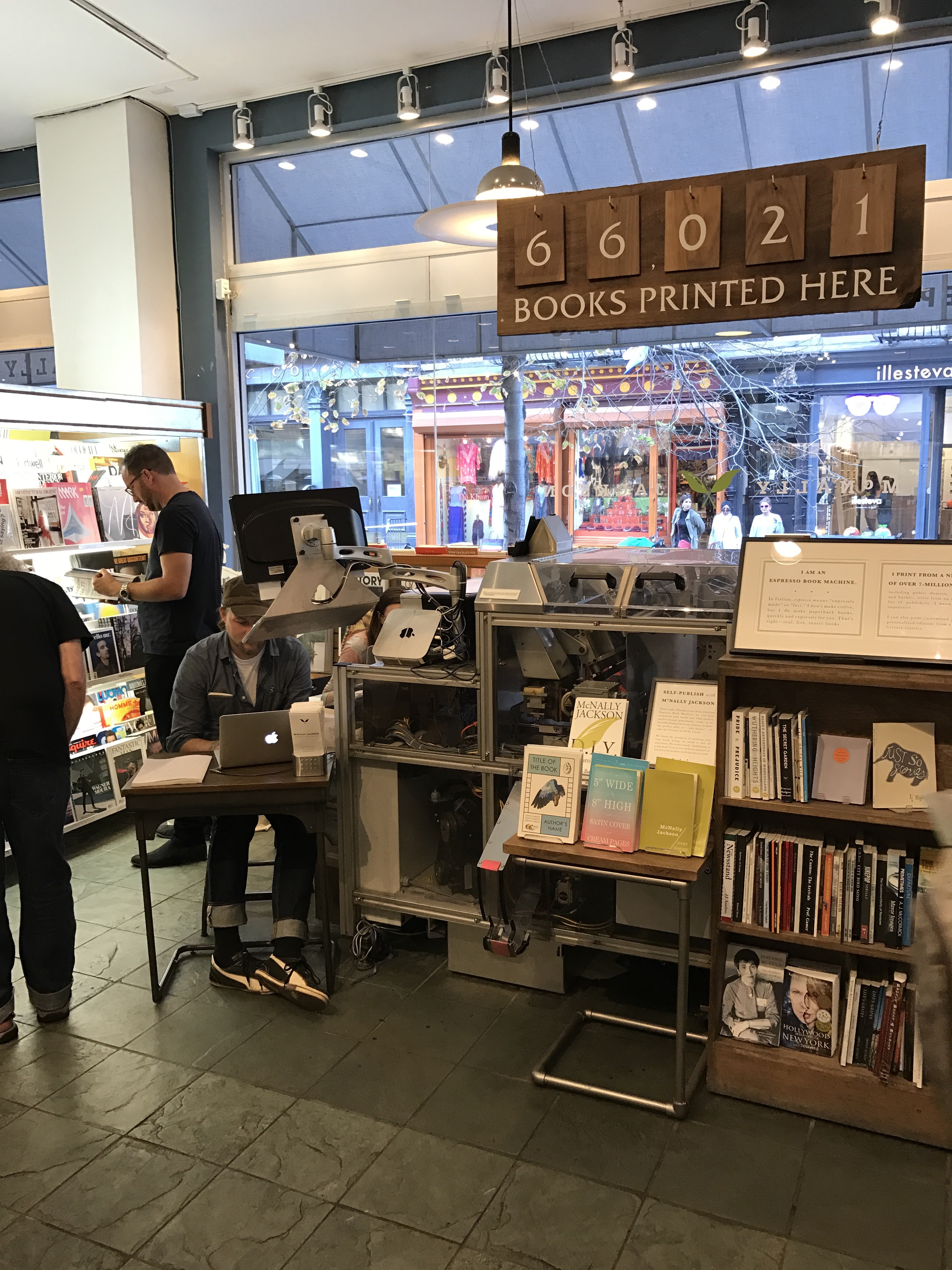 It makes books on the spot, from scratch. It prints them right there in the shop for you. It’s called an Espresso Book Machine. It means that anyone can print and publish a book. I just stood there watching this thing work. Hypnotised by it. A shop assistant actually had to nudge me to get my attention because I was so absorbed by an idea I was conjuring up. The idea, you ask? One sec…

On Friday I spent my day in the offices of Wallace, Witlow and Partners. Offices makes it sound a lot grander than it is. There is actually only one and a half offices, which is kind of funny because there is only really one and a half partners in the firm. Orvin is one, there is some lady called Regina who comes in to deal with the phones, and as far as I can tell Mr Witlow has been deceased for quite some time.

I asked Mr Wallace to track down the existing copyright owners to see if there would be any complications if I wanted to buy the rights back with the money my father left me.

I’m not sure at what point I decided I was going to re-open Ackerly Green Publishing, but I did and I am. I didn’t want to tell you all this last week just in case it wasn’t going to be possible. But the lovely Mr Wallace has assured me that it is and I can.

I’m going to find the complete Ackerly Green library, buy back the copyrights, and one way or another, bring them back to life.

After that, I don’t know. I really don’t.

But for now, Deirdre Green has a plan.

At the weekend I went to Central Park. The lovely Mr. Wallace told me, after much prodding and poking, where they found my father this past summer. I wanted to see it. I wanted to be there. I’m not sure why, and yes I know it’s more than a little morbid. But I wanted to feel that place, maybe find some insight, some direction from the beyond…

This is what I found instead. 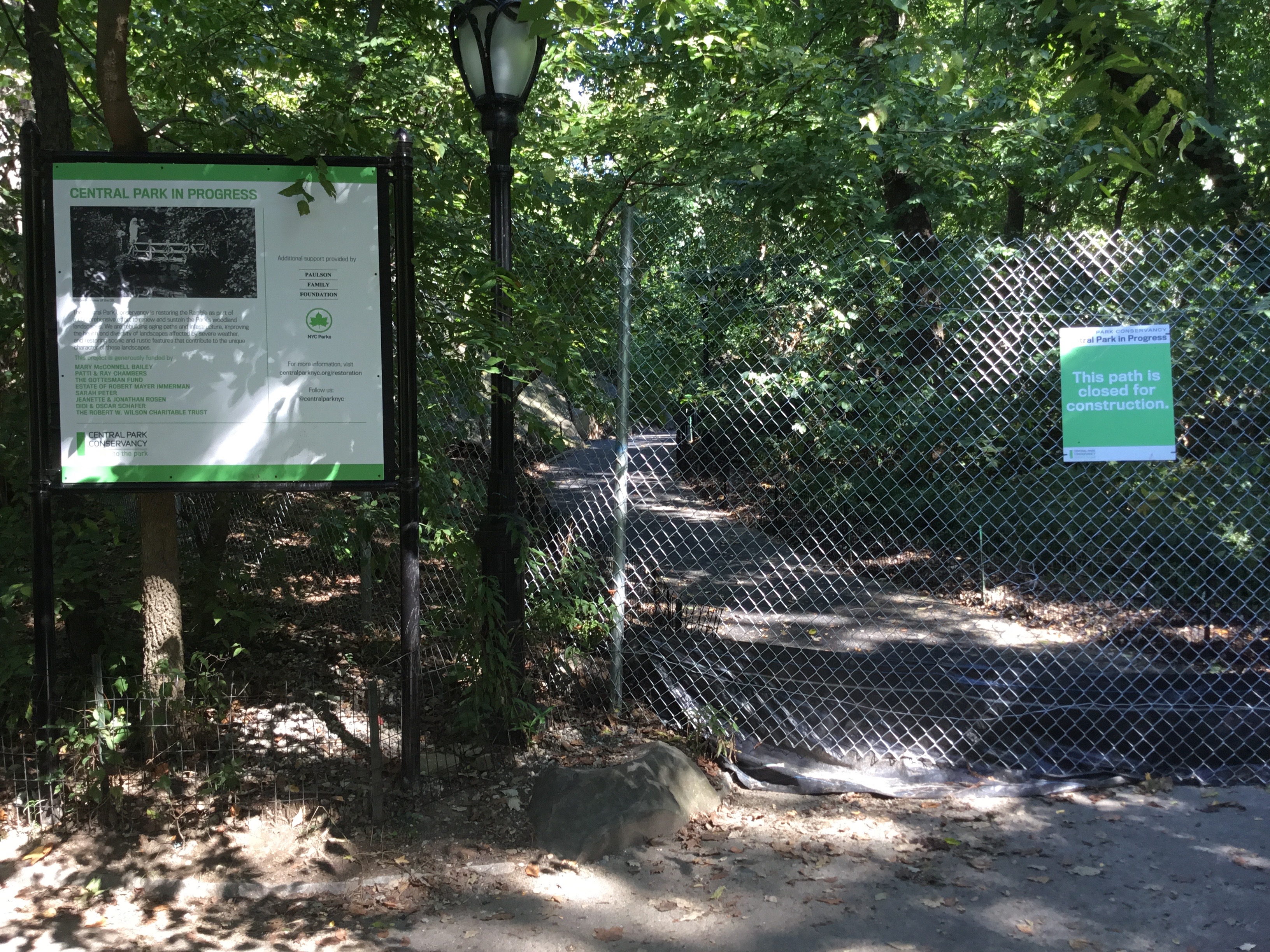 I suddenly felt so claustrophobic, so closed in (and closed off, both literally and figuratively), I came home, did a quick Google search of train schedules, packed one of my Soho knock-off bags, and walked right out the door.

It’s amazing what a few days in a different place can do for the mind. I’m just back from a couple of days “up state” as they say. I decided to have a little holiday from it all to get my head together. I ended up in a B&B in this small town called Hudson. It’s named after the river or the explorer. No one could decide which when asked. It’s a lovely small town, antique shops and bookstores (No AG books, though I always look) and cafes and ice cream shops. It was just the space I needed to think.

It sort of reminded me of home. Not London, but home home. I mean it doesn’t look anything like County Clare and it can’t really compete with the Irish countryside (what can?) But it had the same feeling of being able to breathe and slow down. The leaves are turning and it’s true what they say about the Northeastern part of America in the Fall – it is gorgeous. 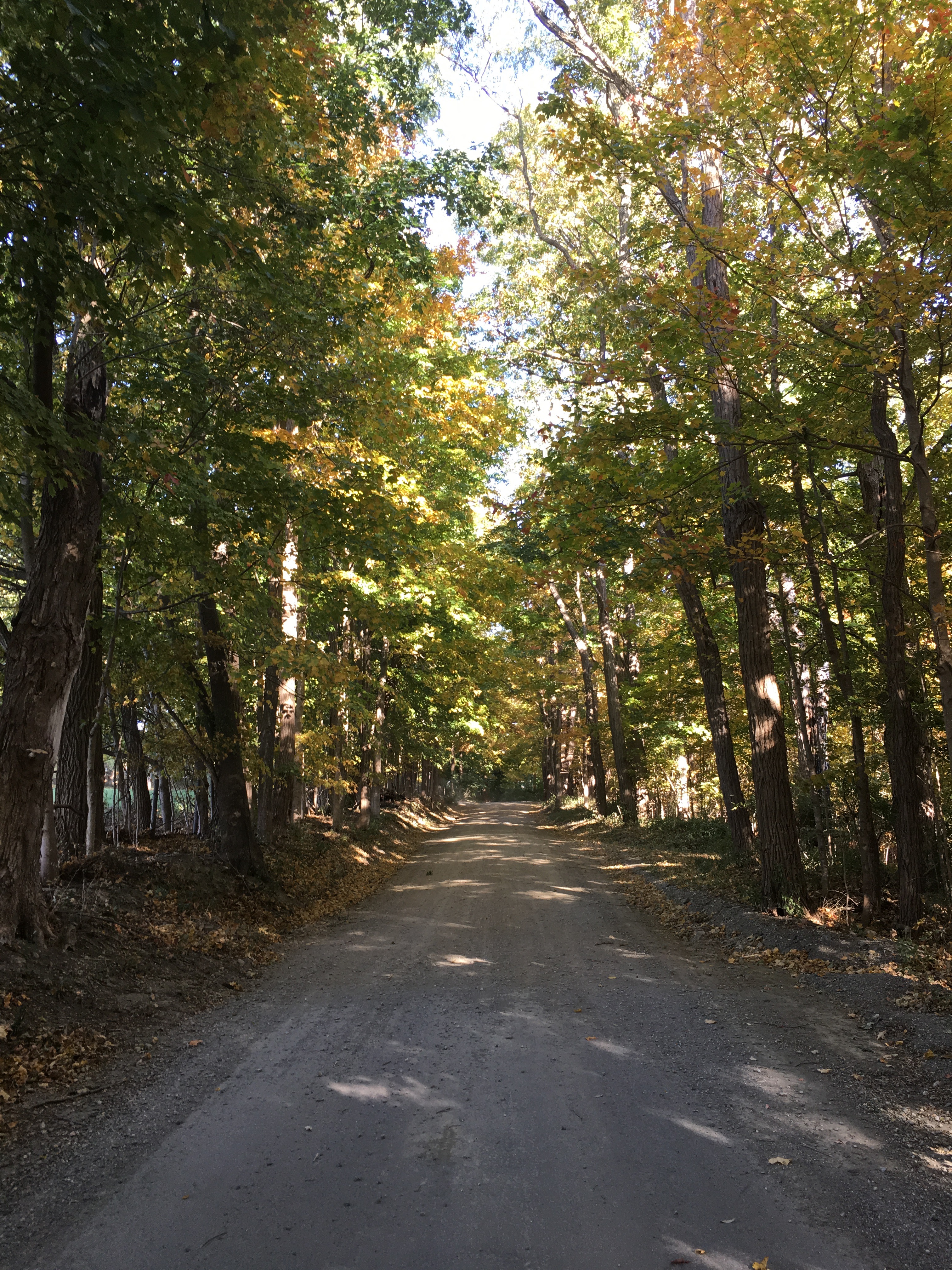 I spent most of the time walking, writing, shopping, and drinking passable coffee. When will these people learn that scorching the beans in molten lava does NOT enhance the flavour. I finished The Wolf And The Wild. It got a very tense and remained incredibly dark. Many twists and reversals and me going back to reread chapters I thought played out one way but later realised something else was going on. I felt the need to go and buy a bunch of fashion and gossip magazines afterwards to cleanse the palate!

When I first got to Hudson I was certain it would be the place to push me over the edge to head home (might’ve even been my subconscious intention), but if anything it’s had the opposite effect. I’ve come back to the city buzzin.

So here’s the thing. I’ve hatched a plan. It’s big. I mean “it’s ‘uuuuge” as that awful man keeps saying. I don’t want to jinx it just yet and it is just a plan right now, but it’s going to be fantastic. I swear. I can’t wait to share it.

So, right now, I’m going to get my practical head on, iron out my thoughts, and see what it will take to make my plans a reality. The one thing I can say is, I won’t be going back to Ireland any time soon.

I’m knackered. I’ve been up all night, but I had to write this as soon as I was done because I don’t want to forget everything. I’ve just finished poring over the documents and the whole thing is just fascinating. I’m jumping ahead, sorry!

So the always lovely Mr Wallace finally dug up the founding papers he’d been promising me and sent them over. It is quite the collection! There’s a lot of stuff about legal wranglings that back up a lot of what he told me about my family. It all feels like a bit of a rabbit hole to be honest. Stuff about numbers, payments, billings, and some pretty awkward memos. Actual memos, not emails!

There are pencil marks (words and drawings) over all the documents. Most of them seem pretty random but now and then there are things I can make out. There are names (I’m guessing they’re old employees?) There are a few maps of various cities with places highlighted on them. I wondered if they were AG properties, investments, or maybe just partners, but there’s nothing in the rest of the papers that match them. And there are numbers everywhere. I’m thinking they’re accountants’ marks.

All of it is yellowed, faded and crumbling, but I found a sealed envelope stuffed in the bottom. The pages inside are pristine. Untouched by sunlight or air for years upon years. I thought they might start crumbling the minute I opened the envelope. Want to see? 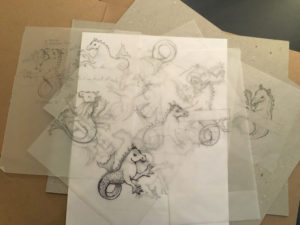 Look at this little fella. Is he not the cutest thing you’ve ever seen?! There are notes on them about Ackerly being the stubborn horse and my grandfather being the mercurial fish. Apparently it’s called a hippocampus, which means horse monster. Sea horse! And the best part is that a couple of the sketches are signed “Sylvia” which means my grandmother drew them! Also, the hippocampus has a name. Herman. Herman the hippocampus. I love Herman!

It seems like they were considering using this as the company logo at some point (the existing Ackerly Green gray box design is laid over him in a couple of the sketches.) Shame they didn’t, it’s perfect. I think I’ve found my tattoo. 😉

It was nice to find something like these sketches, something that feels “Green.” I’d got it in my head that I come from a long line of dreamers, wishers, always off in some fantasy… but all the other documents just felt like drudgery. Even the book, The Wolf And The Wild. I mean, it’s good. But man, is it dark. Just unrelenting. It starts with a man with a (so far) mysterious past who’s preparing for a terrible winter in Canada a thousand miles from civilisation. He settles into his cabin surrounded by ice and snow and nothing else… and then there’s a knock at the door. I’m equal parts riveted and totally freaked out. But this, like Through The Night, feels more horse, less fish. I’m beginning to suspect that Gray Ackerly might have been the major force behind what Ackerly Green published. If not, it’s what I choose to believe. Because I too am a fish and I can believe what I want.

But as I say, the rest of the papers are mostly just the admin and legal stuff relating to the founding of and the first years maintaining Ackerly Green, including:

And an unsigned memo about either Green or Acklerly wanting to buy out the other. Oooooh.

There’s nothing in here past 1959 it looks like. And nothing about the bankruptcy or closing down. Maybe they’re all bunched up together somewhere else?

The whole thing is sort of overwhelming; my heritage laid out on paper in front of me. But it’s also very exciting. It’s a link to my dad. This may sound weird but I think I’m beginning to understand him a little – at least how he ended up where he did. I’m just looking at the pages and I feel overwhelmed, how must he have felt inheriting Ackerly Press? A business. Financials. Employees. All that responsibility and he was younger then than I am now. I would run a mile.

Can you tell I’m still thinking about running back home?

But there’s something about all this stuff. Something I didn’t expect. For the first time in my life I not only feel a connection to where I came from, but also… a sense of responsibility?


I wish I had his watch. Could really use it right now.